The Price Of Desire 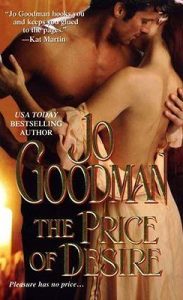 Pleasure has no price…

Olivia Cole is devastated to learn that her ne’re-do well brother has promised her to the operator of a London gaming hall as payment of his debts. Olivia accepts her fate-even if it means that her reputation will suffer from living among rouges and gamblers. But when she meets the sexy and mysterious Griffin Wright-Jones, the Viscount of Breckenridge, Olivia has more than her good name to worry about-for he rouses in her wanton thoughts she’s never dared entertain-until now…

Griffin wears the scars of his life on his striking face, Although he wants Olivia like no other woman before, he doesn’t force her to share his bed-a difficult task considering how beautiful she is. But with each passing night Griffin and Olivia’s resolve weakens until finally they take their greatest gamble on one night of reckless pleasure…

I am frequently asked how I come by my ideas. I tend to answer that question in a variety of ways, depending on my mood. The truth is, I’m usually not able to pinpoint a particular inspiration. If there is such a moment, it’s generally lost in the sometimes overwhelming process of getting the story out of my head and onto virtual paper.

In the case of The Price of Desire, however, I actually remember how the inklings began. As many of you reading this will know, I don’t spend very much time online. Since October 2007, I haven’t even had the internet in my home (now I can only access it at work and I don’t abuse the privilege). I share this because it was somewhat serendipitous that I happened to come upon a chat discussing captivity romances. It seemed to me that it had been a long time since I’d done anything along that line (Passion’s Bride and Mary Michael’s story – I still have a hard time even writing down the title of that book – came to mind). I mentioned that maybe I’d do something like that, and one of the readers (RH) quickly responded with: do it. (Or some sentiment to that effect.) I don’t know, it just stuck with me, not in an entirely conscious way, but as something that swam deep and surfaced from time to time. I truly believe that if the reader hadn’t underscored the idea, I would have written something else entirely. Timing is everything.

My intention when starting Olivia and Griffin’s story was to use the captivity theme. I suppose I did, but it turned out a little differently when Griffin turned out to be so decent. I shouldn’t have been surprised, but I really meant for him to keep Olivia against her will. Everything got flipped on its head as I began to wonder what it would be like if Olivia’s sense of pride and her own uncertain life circumstances made staying in Griffin’s hell more desirable than leaving. And Griffin, when the moment was upon him to insist that she remain just didn’t go about it like a Neanderthal. Those shifts in thinking made the story unfold for me in unexpected ways, and I don’t know if she was his captive as much as he was hers. In the end, that worked for me.

As for The Price of Desire…I strongly advocated for “Wagers of Sin” — and lost. Sigh.