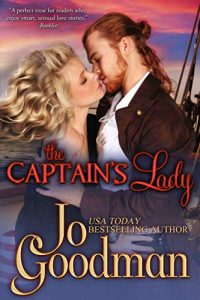 Note: The Captain’s Lady was originally published as Passion’s Bride.

When Alexis Danty awakens to find herself on a ship sailing for America, she is furious with Captain Tanner Cloud for spiriting her away and ruining her plans to avenge the violent deaths of her beloved family. When he refuses to return her to her Caribbean home, she vows one day to escape. . .even though she finds herself more attracted to Cloud with each passing day. She knew Cloud was protecting her from danger, but she would not rest – or abandon herself to his embrace – until she had her revenge. . .

Finally after making a daring escape, Alexis sets out on her mission, reinventing herself as Alex Danty, captain of the notorious pirate ship THE DARK LADY. But when her path once again crosses with Tanner’s, she is unable to forget the unexpected passion that consumed them both. Only he knows the perilous course she is navigating. . .and only he can offer the help she needs – risking treason for the love they can no longer resist. . . 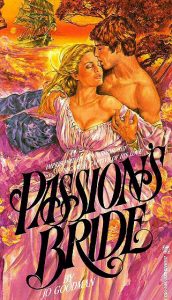 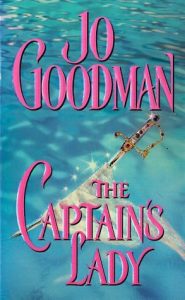 This romance will always be DARK LADY to me. That’s the title I finally decided on when I submitted it to publisher (after publisher) in the hope of hitting pay dirt. I didn’t know then that publishing houses often have their own ideas of what titles readers will pluck off the shelves. In 1984, when PASSION’S BRIDE was first published, it was the word BRIDE (not PASSION), that supposedly was getting reader attention. The other front running title was THE CAPTAIN’S BRIDE. Since Alexis and Tanner don’t marry by the end of the book, I thought that title didn’t serve the story. But times change, and so do the people who name books. When PASSION’S BRIDE was set for a reprint in 1998, the old title was tossed out. I pitched DARK LADY again, but some things don’t change, even with the times. THE CAPTAIN’S LADY was a good second choice, although those of you who have read the book know it could have just as easily been THE CAPTAIN’S MAN. After all, Alexis Danty was a captain herself and Tanner Cloud was as much hers as she was his. It occurs to me that the entire problem could have been solved with perfect political correctness by giving it the title: THE CAPTAIN’S SIGNIFICANT OTHER.

The choice of Alexis as a name for the heroine came years before I put anything in writing. In college I thought a lot about writing a children’s book. Each time I thought about a story I always named the little girl Alexis. She was invariably a bit of a tomboy and generally called Alex. When I decided to try my hand at a romance novel, it was the one thing I didn’t have to think twice about.

My books are peppered with place names that are familiar to me. In THE CAPTAIN’S LADY there is a ship called the HMS Follansbee. I drive through Follansbee, WV, many times a week.

It is worth mentioning here, especially for readers who want to write romance novels themselves, that I finished writing PASSION’S BRIDE in February 1979, just before my 26th birthday. I didn’t see it published until August 1984. I know how fortunate I was to have family and friends who supported me and an agent who made certain the manuscript was seen. I was also lucky to get some assistance along the way from editors who took the time to suggest how I could polish the submission. All I’m really trying to say is thank you to the people who were so generous with their time and don’t give up to the people who are thinking it can’t happen to them.