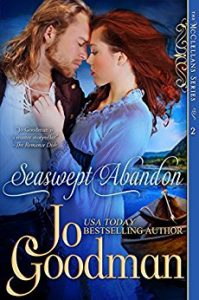 When green-eyed Rae McClellan agreed to be a courier for the Colonies, she never dreamed that on her very first mission she’d coldly kill one man – and hotly love another. But one thing led to another in the boisterous Redcoat tavern and before the spirited beauty could think what to do, she was aboard the private schooner of a British sympathizer! She fought her arrogant enemy with the fury of a tempest. . .then swoon like storm-lashed sail as his hands molded her curves. Passion clouded her fears, rapture drowned her rage, and all Rae could do was ride the current of ecstasy that pulled her into its depths.

Towering Jericho Smith had never lacked for a willing woman, but when his gaze locked with the alluring Rae’s, he knew no other could satisfy him that night. His work for Washington’s army demanded he spurn love and family – and the iron-willed spy was sure the lovely wench would be just another tumble. Then he explored her satiny lips, touched her shapely limbs, stroked her pearly flesh, and Jericho felt himself awash in an unfathomable sea of arousal. He hated needing the hot-tempered miss, yet he couldn’t deny he wanted a lifetime of discovering the secrets of her body and glorying in their sensuous union with wild SEASWEPT ABANDON. 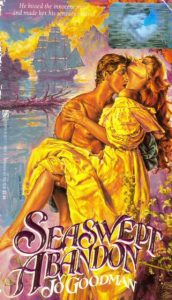 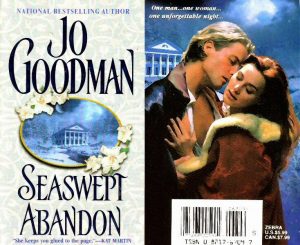 When I began CRYSTAL PASSION I had no idea that there would be a follow up to the story. I rarely plan that far ahead. But as the story unfolded an enigmatic character named Smith appeared and he pretty much left me with no choice but to write about him. I didn’t even know his first name. Rahab McClellan came forward as the most likely candidate to challenge Mr. Smith. Jericho’s name didn’t consciously come from Rahab’s story in the Bible but the connection was obviously lurking at the back of my mind.

Sometimes I’m asked if the characters ever do anything unexpected as I’m writing. Well, yes, they do. Early in SEASWEPT ABANDON, Rae accidentally kills a British officer. Who knew she was going to do that? Not me. I can’t explain how things like that happen. It’s as if my fingers are flying ahead of my brain. (Not a particularly difficult task for my fingers.) Anyway, at that point a decision has to be made: delete or leave it in. I chose to see where things would go if the officer stayed dead. I know the plot turned on that decision and I think it was a good choice. Rae had to struggle with a different set of circumstances and figure things out as she went along.