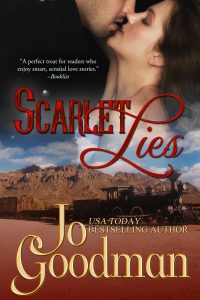 Brooklyn Hancock was no stranger to dangerous situations. But finding herself at the mercy of a man she’d swindled was enough to make the blue-eyed adventuress a bit nervous. Particularly since her would-be mark was intimidatingly strong, incredibly handsome, and undeniably furious. When he pulled a gun on her and ordered her to strip, she cooly complied, knowing she’d soon turn the tables on her unsuspecting captor. But when he pinned her beneath his lean, muscular body, she stopped thinking about escape and began considering the merits of unconditional surrender.

Ryland North had his eye on Brook from the moment he set foot on the Mississippi riverboat. His best friend had lost a fortune to the chestnut-haired chit and Ryland was out for revenge. Now he had her right where he wanted her. . .half naked and helpless in his arms. This part of his plan would be a true pleasure. He would relish making her bend to his will, succumb to his desire. He would watch her startling blue eyes darken with passion; he’d treasure the sound of her beggin for his caresses. And before the night was over, they’d revel in the sinful consequences of her SCARLET LIES. 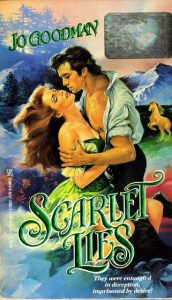 I’ve lived in the northern panhandle of West Virginia since 1978. Brooke and Hancock counties are the two at the tip of the panhandle. The group home where I worked was named after the two counties. Is it any wonder that I ended up with a heroine named Brooklyn Hancock? I also happened to know someone named Brooklyn and the opportunity to smoosh it all together was too good to pass up.

The origin of Ryland North’s name is only a little less strange. I was driving along, minding my business if not the road, musing over names for the next book, and I pass a sign I’d seen lots of times: Rayland, OH. I play around with it a little in my mind and come up with Ryland. Since I was driving north on Route 7…well, you see how it all comes together. The important thing for you to learn here is not to be on the road at the same time I am.

SCARLET LIES was a lot of fun to write. Which was a huge relief after VIOLET FIRE. SCARLET LIES also began its life as MIDNIGHT LIES but another book being released by Zebra that month had midnight in the title. Since I had stopped trying to title books after the DARK LADY rejection, it was okay with me. And in this case, given Brooklyn’s penchant for prevarication, LIES was the important word.