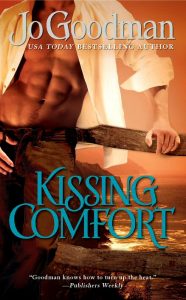 Bode DeLong knows that his playboy brother Bram isn’t really in love with Miss Comfort Kennedy, even though it’s clear that she’s enamored with him. With Bram’s motives for the engagement suspect, Bode figures the safest place for Comfort to be is in his arms. Now, Bode just needs to convince Comfort that the childhood fancy she has for his brother is no match for the incredible desire that sparks between them every time they touch. 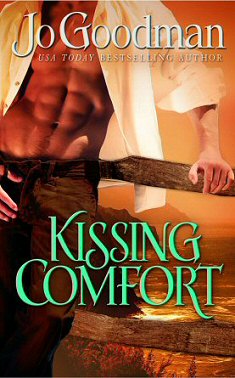 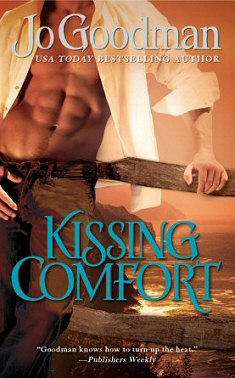 CAN YOU SPOT THE DIFFERENCE?

A funny thing happened on the way to the foreplay.

Allow me to explain. Even after all these years of writing, the process of shepherding a manuscript from submission to bookshelf (and now, e-reader) is still something of a mystery to me. So many people are involved: an editor, an assistant, a copy editor, the publisher, the art department, an agent, and assorted others who have specific jobs I don’t necessarily understand but accept as critical to the finished product.

And sometimes, in spite of all those eyes on the prize, what is really required to spot an OMG! in the making is a friend with myopic vision and a mind that lolls happily in the gutter.

I received the advance reader copies of KISSING COMFORT simultaneous to getting one last chance to find errors with an e-copy of the manuscript. Since I had to attend a work-related counseling conference, I elected to take one of the arcs with me so I could continue proofing while I was away.

During a workshop on sexual addiction — and really, who thought that would be kinda boring? — I was reading the arc in stealth mode. This involved casually sneaking peeks at the open book while pretending to take notes and study the handouts. Occasionally I would gaze glassy-eyed at the power point, which had identical information to the handouts. I rationalized my behavior with the notion that the arc had sex in it so it was part and parcel of the workshop’s theme.

Sitting beside me was a good friend and colleague, and she was sort of jealous that I had something more interesting than Angry Birds to occupy me.

When the workshop was over, I shut the book.

And my friend looked sideways at the cover and exclaimed, “Is that his penis coming out of his pants?!” Except she didn’t say penis. And she didn’t whisper.

Well, no, it wasn’t his dick coming out of his pants, but if you don’t have your reading glasses on, and you just give the cover a glance, and you’ve been sitting in a sexual addiction workshop, and the sunlight is hitting the hero’s abs just so, and you have absolutely no filters when it comes to saying what you think in these absurd moments, gee, it does kinda look like his dick is coming out of his pants.

People close by peeked over my shoulder at the cover to confirm that yes, indeed, they saw it too.

I didn’t think much more about the incident, but as serendipity would have it, my editor emailed me the following week, and this story was fresh enough in my mind that I shared it with her. Her reply was almost immediate and pretty darn funny. She didn’t lose any time heading to the art department to get all that suggestive sunlight fixed.

She captured the problem beautifully when she said, “You can’t see it at all unless you’re looking for it, but once you see it, you can’t ever NOT see it again!”

According to Wendy, the cover provided a lot of amusement at Berkley as she asked her colleagues to play what’s-wrong-with-this-picture. She now has the poster artwork in her office.

The “pop-up penis” is available only on the arc editions. You’ll have to decide if you wish it were otherwise.